Val David One Week In Residence and Getting Lots Done!

It’s hard to believe that I have been here a week almost — I arrived late last Wednesday and the time is flying by. This morning I woke up to some very welcome rain. Yesterday we could smell the fires, but today’s downpour seems to have taken care of that.

I am a bit frustrated because the ms I was hoping to work on has not arrived and time is flying by. I am dabbling around with some other writing, but my heart is with the book coming out in the fall and it is hard to make the switch to a new novel…

I had some great photos but Iphoto quit in the middle of the download and I lost them all…I hate it when that happens…Finally the black fly bit the size of a small car that I’ve had on my neck all week is going down. I drown myself in bug spray daily and I think the people used to giant bugs find that a bit odd. Oh well. That bite kept me awake one night because I thought maybe une tique had taken up residence in my flesh…ick…. 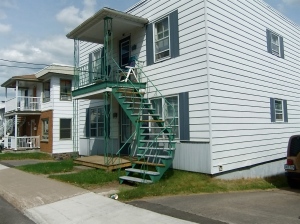 I love these stairs…they are on many houses here and lead to the second story. I don’t know why we don’t do this in Vancouver. If we build a lane house, maybe the guys could add some to the design. I plan on sending then a few photos (some of those that I lost today…).

Like everywhere else, not everyone is perfect and today while I was out walking in the village I stopped in to visit a potter’s studio that I’d read about earlier in my visit. She had really nice stuff and I probably would have bought something, but there was a cheeky little dude who was rude to me in both French and English – clearly not pleased with someone not native speaking on his turf. Anyway, I felt discouraged until I stopped in at a little cafe where the woman serving couldn’t have been kinder or more patient with my French. Then I felt better 🙂

I don’t know if I’ll go back to the L’atelier du Potier, but I will look for Marie-Andree Benoit’s work elsewhere in the village. She is very talented and it’s too bad about her little pal. 😦

Luckily, Val David is full of amazing artists. Check out the variety of talent here.
Tomorrow I plan to stop in for a cafe at the Mouton Noir and I think I will not be disappointed!

I know it gets cold here, but it's hot now!

Filed under Travelling In the World

One response to “Val David One Week In Residence and Getting Lots Done!”